http://www.mrtc.mdh.se/projects/siblings/
The aim of the Siblings project is to show that human computer interaction does not need follow the guidelines of the desktop metaphor interface in order to yield good utility and user satisfaction. On the contrary the hypothesis is that these metrics would improve for different interaction paradigms. We know that todayâs interfaces merely explains how the computer works, thus if one were to create an interaction paradigm that better supports human behaviour, users should less frequently have to put up with computer idiosyncrasies.From the technological end, the starting point of the project is to remove many of the underlying infrastructure components that the desktop metaphor explains to provoke new designs. The main components removed are: the file system including the concept of files, application programs, and windows. Instead the model for persistent storage of content is a database. Its entire contents is visualised on an infinitely large two-dimensional surface.From the cognitive psychology end, the mental model for human information management to map on the interface is the theory of cognitive collages. The design relies on humansâ spatial abilities for organising content. The visual presents of the information content works as reminders and feeds cognitive reference points. The use of only two dimensions omits mental rotations.The Siblings project interaction paradigm effects: information visualisation, information navigation, user collaboration, multi modal interface usability, information access, program architecture, and scalability over different platforms.Support for the Siblings project interaction paradigm approach is sought by implementing software prototypes, and by showing these prototypes to users. Current studies are focused on collaborative music improvisation.

When Information Navigation Divorces File Systems –Database Surface Prototype Results (Sep 2003) Proceedings of the Good, the Bad and the Irrelavant

When Information Navigation Divorces File Systems - Database Surface Prototype Results (Sep 2003) Rikard Lindell The Good, the Bad, and the Irrelevant: The user and future of information and communication technologies

Users Say: We Do Not Like to Talk to Each Other (Aug 2003) Proceedings of Second International Workshop on Interactive Graphical Communication

Users Say: We Do Not Like to Talk to Each Other (Aug 2003) Rikard Lindell Graphical Communication Workshop 2003 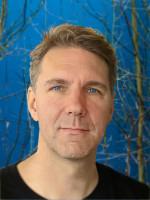