Research on autonomous agents and vehicles has gained momentum in the
past years, which is reflected in the extensive body of literature and the investment
of big players of the industry in the development of products such as
self-driving cars. One open problem in the area is the modelling of interaction
between different actors (software agents, humans), such that there is smooth
collaboration and transfers of control between the involved parties. The overall
ambition is the achievement of human-like teamwork. One way to approach
this problem employs the concept of adaptive autonomy. Agents that display
adaptive autonomous behaviour are able to change their autonomy levels as a
response to changing circumstances during their operation, by making decisions
about whether to depend on one another or allow others to depend on
them. Thus, autonomy is expressed in terms of dependencies between agents.
As these dependencies change in time, so does autonomy.
This research proposes an agent architecture that models the internal operation
of an agent, and uses the concept willingness to interact as the backbone
of adaptive autonomous behaviour. The willingness to interact captures both
aspects of interaction, through its two components, the willingness to ask for
help – the likelihood that an agent will ask for assistance, and the willingness
to give help – the likelihood that an agent will help upon being requested. A
mathematical framework is developed which estimates the components of the
willingness to interact by integrating the impact of several factors that are argued
to be relevant for shaping adaptive autonomous behaviour. This proposal
is evaluated by comparing the performance of a population of agents with adaptive
autonomy to agents with static autonomy or strategies. Moreover, the role
of initial configurations for the willingness to interact, different schemes for
the update of its components, and issues related to agent exploitation are investigated.
Results indicate the potential benefit of the proposed solution with
respect to agents with static strategies. 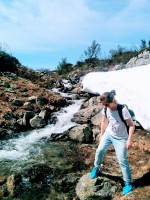