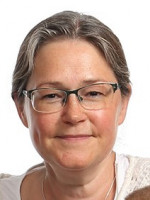 Elisabeth Uhlemann received the PhD degree in Communications Theory from Chalmers, Sweden, in 2004 and worked as Assistant and later Associate Professor at Halmstad University 2005-2012. During this period she also worked with Volvo Technology where she was involved in several EU FP6 projects: CVIS, Safespot and Pre-drive C2X, studying communication requirements for traffic safety applications in vehicular networks. She has contributed to the European ITS communications architecture produced within COMeSafety and she has served as a technical expert in ETSI TC ITS. She has held visiting positions at Uni. South Australia in 2005, TU Berlin in 2007 and Uni. Canterbury, New Zealand in 2011. She has also worked as a consultant at Ikanos Communications, USA, in 2005 with VDSL protocols and at Free2move, Sweden, during 2009-2010 with wireless audio. She has served in the grading committee of more than 15 PhD degrees in Sweden, Spain, Germany and Australia and she has organized two post-graduate courses “Communications for Cyber-Physical Systems” in 2014 at MDH and “Block Turbo Codes and Iterative Decoding” at Halmstad University in 2006. She is a Research Grant Reviewer for Vinnova, Sweden’s innovation agency, in the area of vehicular electronics, software and communications and serves as a senior editor for IEEE VT Magazine in the area of Connected Vehicles. She is also co-chair of the Subcommittee on Industrial Communication Systems within the IEEE IES Technical Committee on Factory Automation and vice chair of the Swedish IEEE VT/COM/IT chapter. She has two best paper awards: APCC 2005 and ETFA 2010, is part of the steering group of a large research profile at Karlstad University, and in the Faculty board at Mälardalen University.