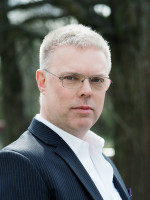 Since 2002 Daniel Brahneborg has worked at Braxo AB, formerly named Infoflex Connect AB, as a developer, mainly on an SMS gateway.

He received his MSc in Computer Science in 2015 from Umeå University.

In 2017 he became an industrial PhD student at Mälardalen University, where he got his licentiate degree in 2020.

Daniel Brahneborgs current research focus is on distributed systems with geographically distributed nodes. In particular, how to achieve good performance from them, how to make them scale, and how to test and monitor them.

He has a profile on ResearchGate.