Electroencephalography (EEG) based Brain-Computer Interface (BCI) systems are a new development in the field of applied neurophysiology. These systems are being developed in order to enable people who cannot use their motor functions, such as Amyotrophic Lateral Sclerosis (ALS) and Tetraplegic patients to control some computer based devices. Currently the most important application areas of BCI systems are: to facilitate the communication of ALS and paralyzed patients with their environments; and to enable people with spinal cord injuries to physically manipulate their surroundings by controlling neuroprostheses. This new approach has been made possible thanks to progress in EEG analysis and in information technology, which has led to a better understanding of psychophysical aspects of the EEG signals. BCI systems enable information flow the brain directly to the outside world. For widespread use of brain signals for such objectives, effective signal analysis and patterns recognition techniques are needed.

BCI systems can be realized both in an invasive fashion through microelectrodes directly implanted in the brain the brain and in a non-invasive fashion through electrodes connected to the head surface. In this project, we consider non-invasive measurement scenarios. Systems realized through signals measured from outside the head are easier to use by patients in practice. However, in the process of signal propagation from inside the brain to the outside of the head, significant signal losses as well as superposition of various signals occur; furthermore noise creeps into the data. Consequently, automatic signal analysis becomes yet more challenging.

Our project involves a fundamental piece of research with the underlying motivation of the development of brain-computer and brain-machine systems that will be actively used by 8.5 million handicapped people in this country. To the best of our knowledge, BCI signal analysis research activity in this country is very limited. The scientific knowledge that will be produced by this project (including the methods we will develop, the experimental set up, and the data sets we will collect) has the potential of inspiring and enabling new research projects on this topic. Increasing interest in BCI in many countries; existence of open and interesting signal analysis problems in this context, and the potential of widespread BCI use in the near future make this project topic attractive and timely.

Wolpaw et al. made the following remark about the future of BCI systems in a 2002 article: BCI systems is a topic on which progress will be made through joint work of different disciplines including neurobiology, psychology, engineering, mathematics, computer science, and clinical rehabilitation. The team we have put together for this project has an interdisciplinary structure in accordance with this remark. 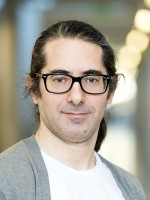