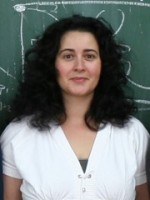 Cristina Seceleanu is Associate Professor and Docent at MDH, Networked and Embedded Systems (NES) Division. She received a MSc. in Electronics from Polytechnic University of Bucharest, Romania, in 1993, and a Ph.D. in Computer Science from Åbo Akademi and Turku Centre for Computer Science, Åbo/Turku, Finland, in Dec. 2005. Her research focuses on developing formal models and verification techniques for designing predictable real-time embedded systems.

Cristina is leading the Formal Modeling and Analysis of Embedded Systems research group, at MDH, and has been teacher representative for Embedded Systems, IDT, in the committee for research of the faculty board (Utskottet för forskning), 2015-2016.